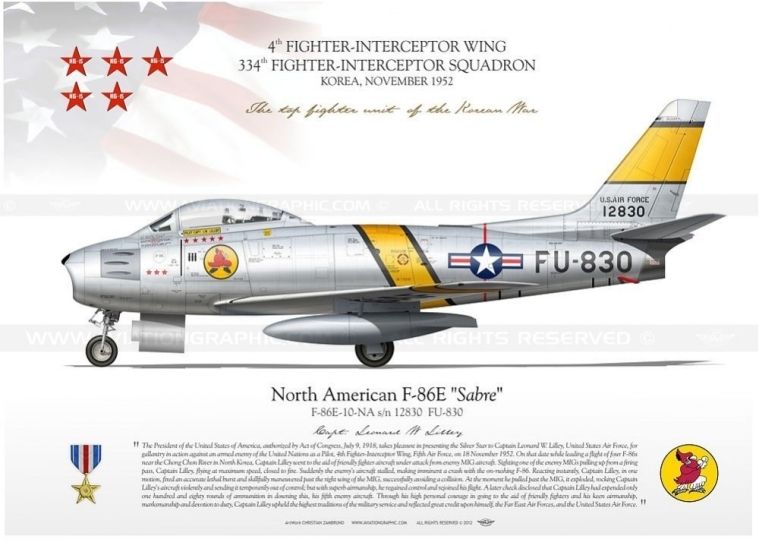 "The President of the United States of America, authorized by Act of Congress, July 9, 1918, takes pleasure in presenting the Silver Star to Captain Leonard W. Lilley, United States Air Force, for gallantry in action against an armed enemy of the United Nations as a Pilot, 4th Fighter-Interceptor Wing, Fifth Air Force, on 18 November 1952. On that date while leading a flight of four F-86s near the Chong Chon River in North Korea, Captain Lilley went to the aid of friendly fighter aircraft under attack from enemy MIG aircraft. Sighting one of the enemy MIGs pulling up from a firing pass, Captain Lilley, flying at maximum speed, closed to fire. Suddenly the enemy's aircraft stalled, making imminent a crash with the on-rushing F-86. Reacting instantly, Captain Lilley, in one motion, fired an accurate lethal burst and skillfully maneuvered past the right wing of the MIG, successfully avoiding a collision. At the moment he pulled past the MIG, it exploded, rocking Captain Lilley's aircraft violently and sending it temporarily out of control; but with superb airmanship, he regained control and rejoined his flight. A later check disclosed that Captain Lilley had expended only one hundred and eighty rounds of ammunition in downing this, his fifth enemy aircraft. Through his high personal courage in going to the aid of friendly fighters and his keen airmanship, marksmanship and devotion to duty, Captain Lilley upheld the highest traditions of the military service and reflected great credit upon himself, the Far East Air Forces, and the United States Air Force."