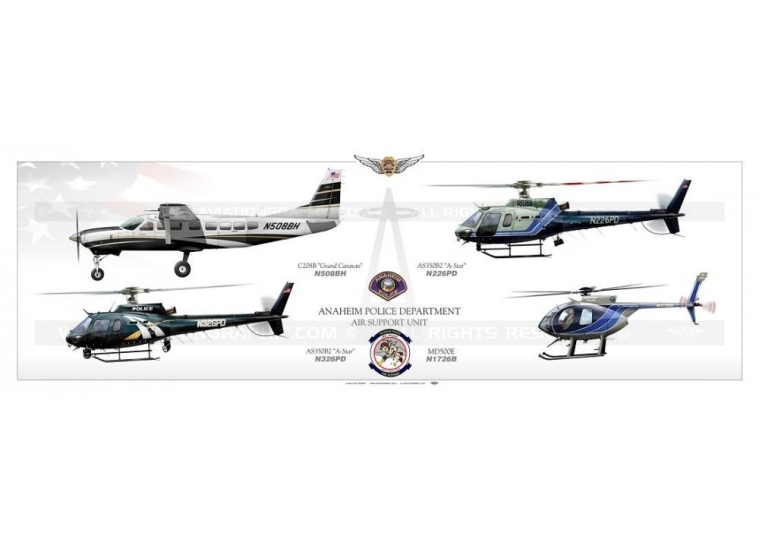 In 1970, the Anaheim Police Department welcomed a new crime-fighting tool called the police helicopter, call-sign “26 Angel”. The Department’s first ever fleet consisted of two Hughes 300 helicopters, and the Air Support crew was manned by three pilots and three observers.  The on-board technology was simple in the beginning and included two 250-watt spotlight bulbs and a police radio.  Despite this low-tech equipment, the patrol officers being supported by the new aerial platform were grateful for assistance from above.  VIP flights, photo missions, pursuit interceptions, and command and control at major events became additional missions as the Department began to realize the potential of the air support asset. The helicopters and crews were originally based at the John Wayne Airport and later moved to the Gary A. Nelson Memorial Heliport located just southeast of city center.  The Department purchased an Enstrom helicopter in 1977 and enjoyed its greater speed and fuel endurance.  In 1980, the Unit bought its first McDonnell Douglas/MD 500, which began the transition to a fleet of three 500’s.  These turbine powered helicopters provided higher speed and payload capabilities. The extra power was important, as added mission technology was rapidly advancing. The MD 500’s saw the first use of infra-red technology, which allowed the flight crews to look for suspects and missing people in low or no-light conditions.  The need for greater fuel endurance and carrying heavier mission equipment continued to grow, and the Department began switching its fleet to Eurocopter AS350B2 A-Stars in 2005. In 2006, the Air Support Unit moved to the Fullerton Airport, where it remains today. It is staffed by six officer-pilots, a sergeant-pilot, a lieutenant, and two mechanics. The crews fly with night-vision goggles, and the helicopters are equipped with a state-of-the-art color/infra-red camera system, gyro-stabilized binoculars, multi-band police radios, electronically-guided spotlight, public address system, moving map display, video downlink and a computer-aided dispatch terminal. As the Unit’s involvement with covert surveillances increased over the years, the need for a dedicated surveillance platform led the City to purchase a fixed wing aircraft to support these missions. The Unit obtained a Cessna 208B Grand Caravan in 2012, and the officer-pilots now fly both rotary and fixed wing aircraft.  Aside from the added surveillance capabilities, the addition of the airplane also allows for investigative flights, prisoner transport flights and major incident command & control. With its humble beginnings in 1970 to the current multi-category aircraft fleet, the Anaheim Police Department Air Support Unit’s primary mission remains to provide support to patrol officers. As the technology, aircraft performance and fleet diversification have advanced with crew training and professionalism, the unit has expanded its capabilities to support virtually any public safety aviation mission.

EXPRESSELY MADE FOR ANAHEIM POLICE DEPARTMENT