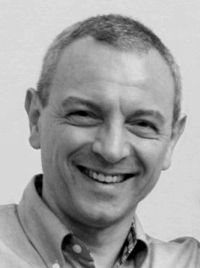 Cartoonist and illustrator, he began to draw when he was very young and had his first cartoon exposition in 1980. Some of his past and actual contributes with many national and international magazines and newspapers are: Linus, Playboy, The Huffington Post (It), Il Male, La Settimana Enigmistica and Domenica Quiz. He also won prestigious international awards: Salone Internazionale dell’Umorismo di Bordighera, Biennale dell’Umorismo nell’Arte di Tolentino, Rassegna Nazionale di Dolo e International Cartoon Contests di Krusevac (Yugoslavia) ed Haifa (Israel), ecc. His cartoons are kept in the most important museums as “Museum of Contemporary History of Paris”. Creator and Art Director of Ohmygoodness.com, the second virtual card website in the world until 2002, today is one of the most present cartoonists on the web.His most famous illustrated book,“The Crazy Kamasutra”, was printed in many countries.