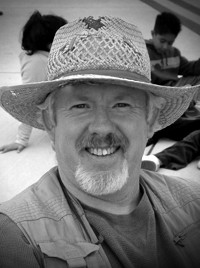 Pat Cherry is a self taught aviation artist who, since his very first air show back in 1976, has cultivated his love of aviation. He has a special place in his heart for Air Racing and WWII aircraft,  which is the subject of many of his art works. He started out doing a few fine art pencil drawings using his extensive photo collection as willing subjects, but felt a desire to do something a bit different. After seeing a few aircraft cartoons/caricatures the idea was planted. It was during the cancelled Reno Air Races in 2001, following the 9-11 attacks, that the idea of doing the Aircraft Caricatures took hold. With plenty of time to shoot all the racers on the ground he took as many detailed pictures as possible and headed home to create some unique art. The goal was to create a caricature of each Unlimited aircraft at the races that year. The trick was finding the best way to capture all the detail, yet find a whimsical look for each aircraft. The first caricatures were color pencils on gray board, but that limited the amount of detail he could include, so he moved onto watercolors then air brush. Each time adding more detail increasing the level of accuracy. Today each caricature starts as a pencil sketch, which is then detailed and hand inked, scanned and painted using a computer. Each caricature contains as much detail as can be included within the caricature style. The goal is to have an art work that combines the details and accuracy of official squadron prints, and the fun look of a caricature. Today the catalog of caricatures includes Air Racers, Warbirds, Civilian Aircraft, Modern Military Aircraft, Helicopters (civilian and military) as well as AFV/Tanks, Naval Vessels, Cars/Race Cars and a collection of TV and SciFi vehicles.
“The real joy is seeing someone as they pass by the Blackheart Art booth at an air show, point and smile when seeing the caricatures for the first time…..as well as working on that special custom print with a customer who has a personal connection to the aircraft through a relative, friend, or loved one. These are just fun art works to create.”                                            - Pat Cherry

For more information about these caricatures or to contact the artist regarding  commissions:blackheartart@earthlink.net